Our new paper “What are ‘good’ depression symptoms? Comparing the centrality of DSM and non-DSM symptoms of depression in a network analysis” was published in the Journal of Affective Disorders (PDF).

In the paper we develop a novel theoretical and empirical framework to answer the question what a “good” symptom is. Traditionally, all depression symptoms are considered somewhat interchangeable indicators of depression, and it’s not clear what a good or clinically relevant symptom is. From the perspective of depression as a network of interacting symptoms, however, important symptoms are those with a large number of strong connections to other symptoms in the dynamic system (i.e. symptoms with a high centrality).

So we went ahead and estimated the network structure of 28 depression symptoms in about 3,500 depressed patients. We found that the 28 symptoms are intertwined with each other in complicated ways (it is not the case that all symptoms have roughly equally strong ties to each other), and symptoms differed substantially in their centrality values. Interestingly, both depression symptoms as listed in the Diagnostic and Statistical Manual of Mental Disorders (DSM) — as well as non-DSM symptoms such as anxiety — were among the most central symptoms. 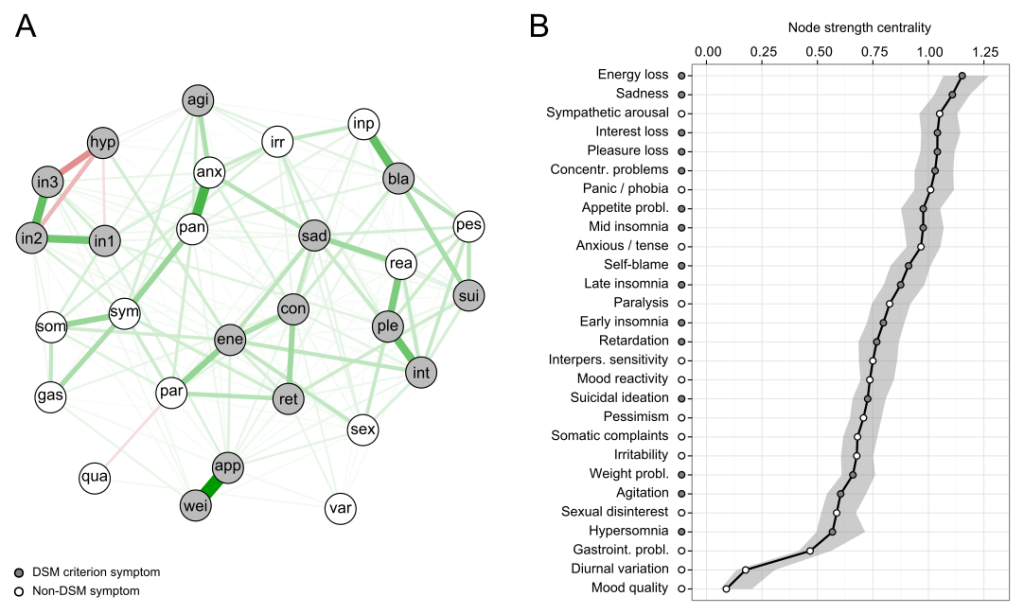 When we compared the centrality of DSM and non-DSM symptoms, we found that, on average, DSM symptoms are not more central. At least from a network perspective, this raises substantial doubts about the validity of the depression symptoms featured in the DSM. Our findings suggest the value of research focusing on especially central symptoms to increase the accuracy of predicting outcomes such as the course of illness, probability of relapse, and treatment response.