In the past year, we have published two tutorial papers on the bootnet package for R, which aims to provide an encompassing framework for estimating network structures and checking their accuracy and stability. The first paper, published in Behavior Research Methods, focuses on how to use the bootstrapping methods to assess the accuracy and stability of network structures. The second, published in Psychological Methods, focuses on the most commonly used network model, the Gaussian graphical model (GGM; a network of partial correlations), and discusses further utility of the bootnet package.

With more than a year of development, version 1.1 of the bootnet package marks the most ambitious series of updates to the package to date. The version is now ready for testing on Github, and will soon be released on CRAN. This version includes or fleshes out a total of 7 new default sets, including one default set aimed at time-series analysis, and offers new functionality to the default sets already included in the package. In addition, the package now fully supports directed networks as well as methods resulting in multiple network models, and supports the expected influence centrality measure. Furthermore, the plotting functions in bootnet have been updated and now show more information. Finally, the package includes a new simulation function, replicationSimulator, and greatly improves the functionality of the netSimulator function. With these extensions, bootnet now aims to provide an exhaustive simulation suite for network models in many conditions. This blog post is intended to introduce this new functionality and to encourage testing of the functionality before the package is submitted to CRAN.

The package can be installed using:

As can be seen, several of these are newly added. For example, we can now estimate the two recently added more conservative GGM estimation methods added to qgraph, which I described in an earlier blog post. Taking my favorite dataset as example:

The optimal unregularized network that minimizes BIC (note that tuning defaults to 0 in this case) can be obtained as follows:

It is generally recommended to use the stepwise improvement of edges with stepwise = TRUE, but I set it to FALSE here to make this tutorial easier to follow. Likewise, the thresholded regularized GGM can be obtained using the new threshold argument for the EBICglasso default set:

As typical, we can plot the network: 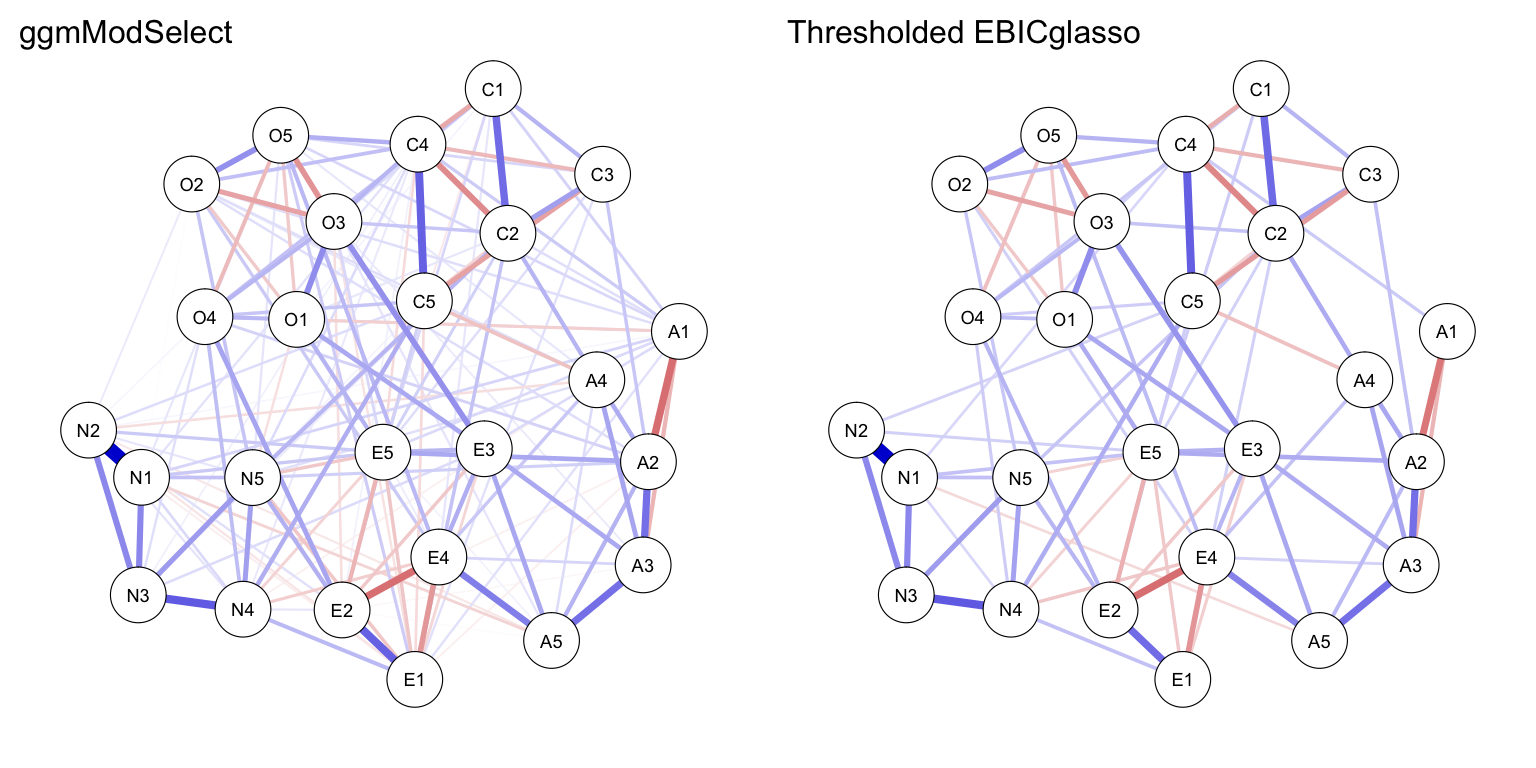 One robust finding in psychological literature is that all variables tend to correlate positively after arbitrary rescaling of variables – the positive manifold. Likewise, it is common to expect parameters focusing on conditional associations (e.g., partial correlations) to also be positive after rescaling variables. Negative edges in such a network could indicate (a) violations of the latent variable model and (b) the presence of common cause effects in the data. To this end, bootnet now includes the ‘principalDirection’ argument in many default sets, which takes the first eigenvector of the correlation matrix and multiplies all variables by their corresponding sign. For example: 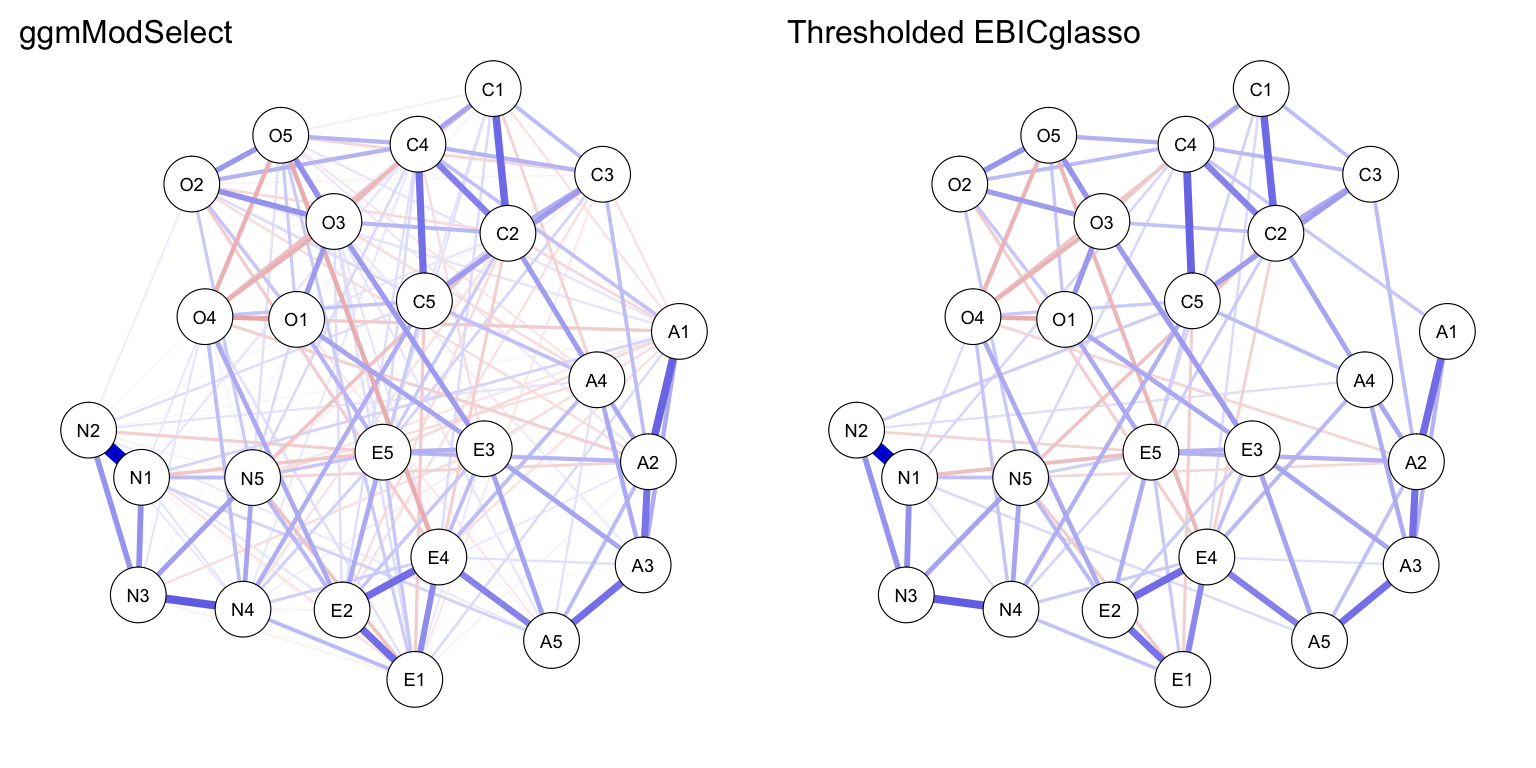 This makes the edges of an unexpected sign much more profound, at the cost of interpretability (as now the rescaling of some variables has to be taken into account).

One potentially useful centrality index that can be used on graphs mostly showing only positive relationships (and all variables recoded in the same direction) is the newly proposed expected influence measure. Expected influence computes node strength without taking the absolute value of edge-weights. This centrality measure can now be obtained: 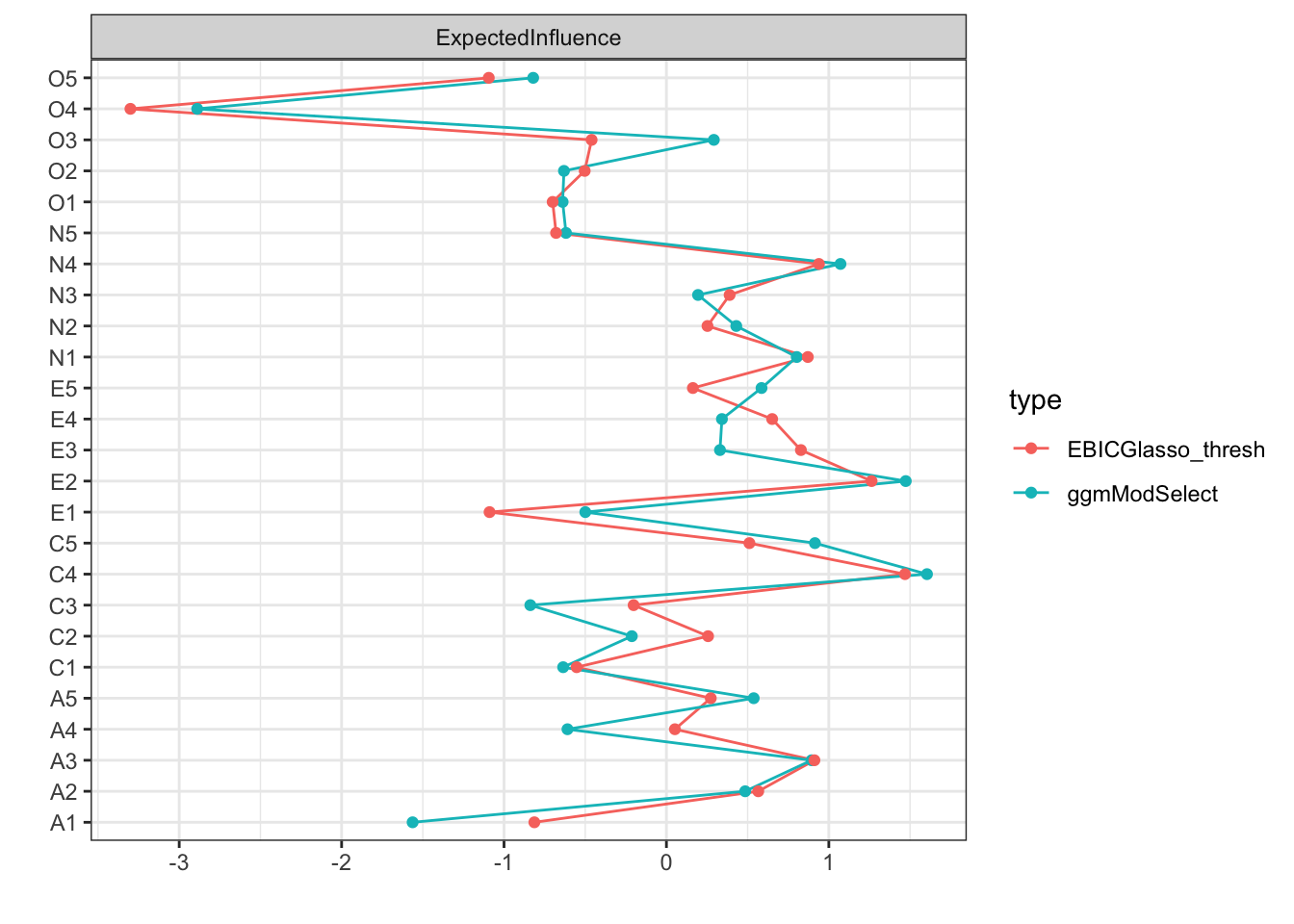 To bootstrap expected influence, it has to be requested from bootnet(): 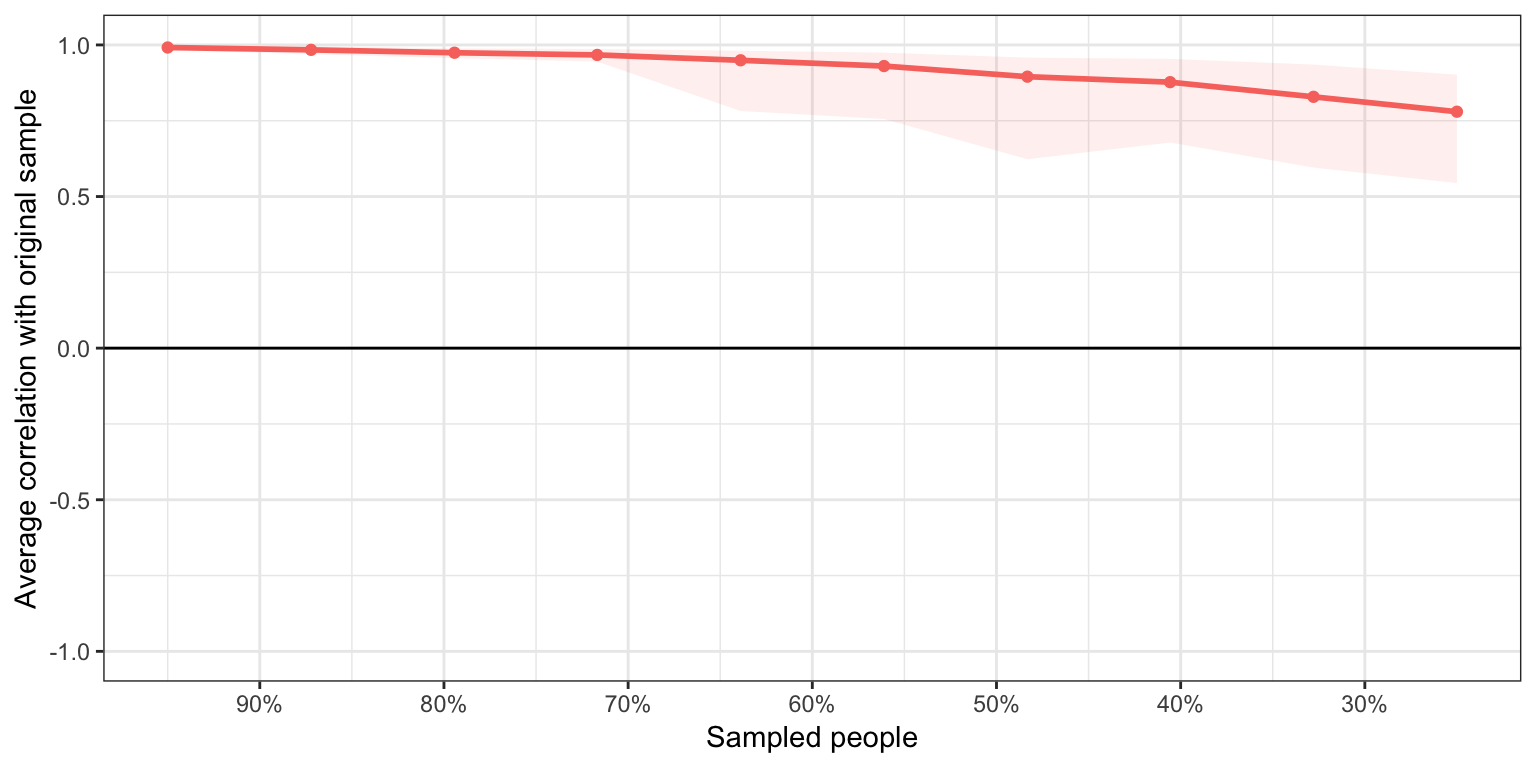 In addition to expected influence, thanks to the contribution of Alex Christensen, randomized shortest paths betweenness centrality (RSPBC) and hybrid centrality are now also supported, which can be called using statistics = c("rspbc", "hybrid"). 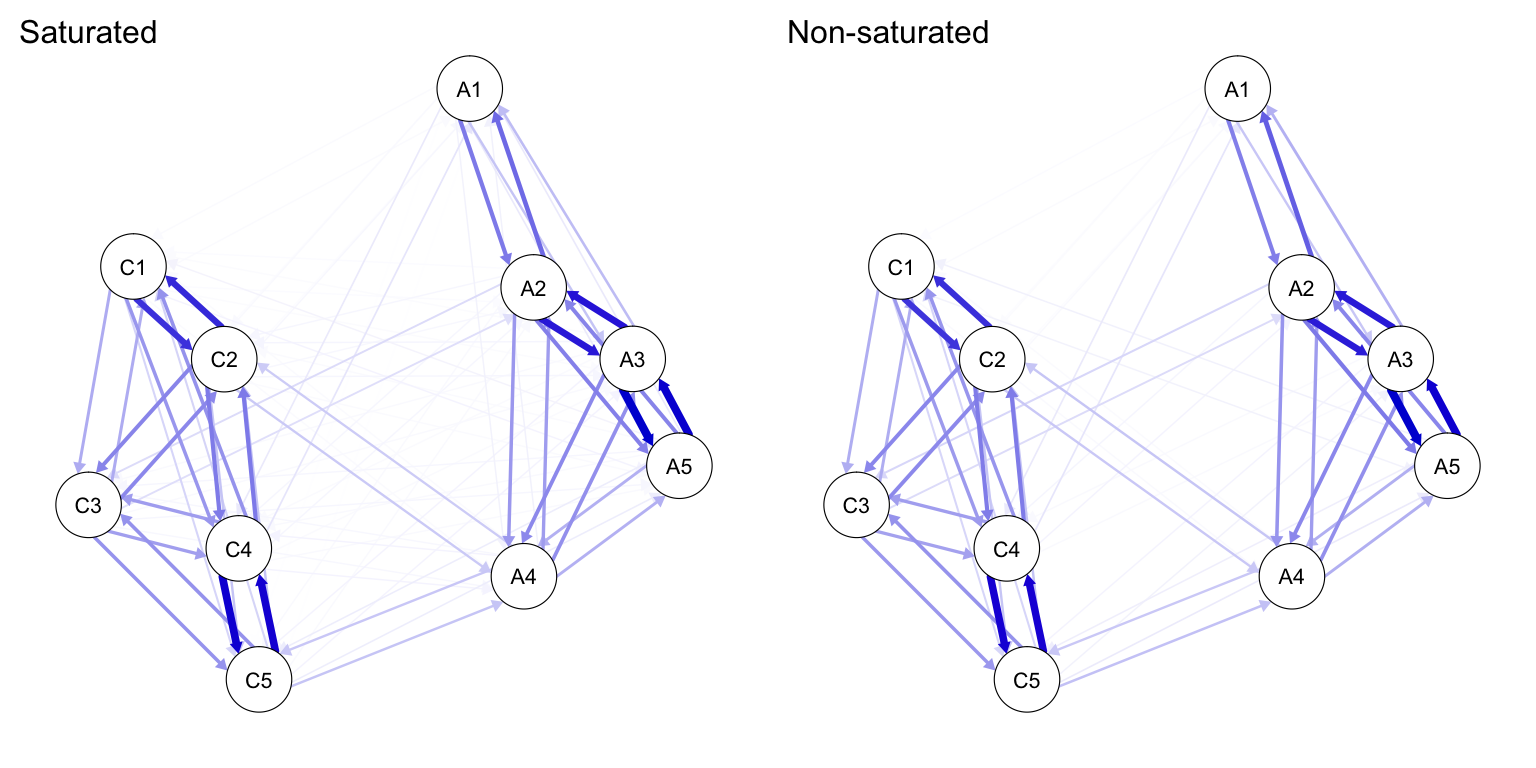 The difference is hardly visible because edges that are removed in the GGM structure estimation are not likely to contribute a lot of predictive power.

The LASSO regularized estimation of graphical vector auto-regression (VAR) models, as implemented in the graphicalVAR package, is now supported in bootnet! For example, we can use the data and codes supplied in the supplementary materials of our recent publication in Clinical Psychological Science to obtain the detrended data object Data. Now we can run the graphical VAR model (I use nLambda = 8 here to speed up computation, but higher values are recommended and are used in the paper):

We can now plot both networks: 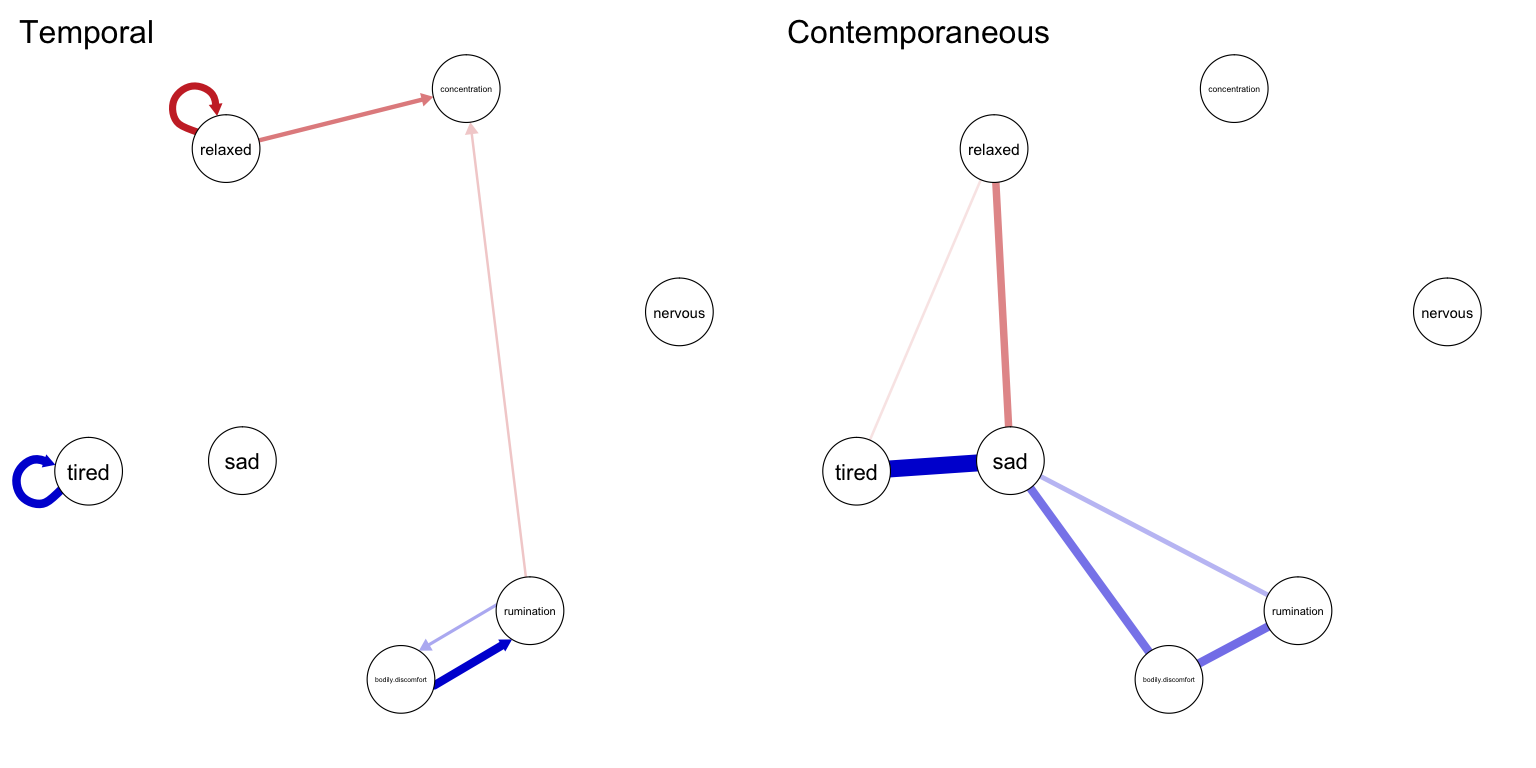 The bootstrap can be performed as usual:

To plot the results, we need to make use of the graph argument: 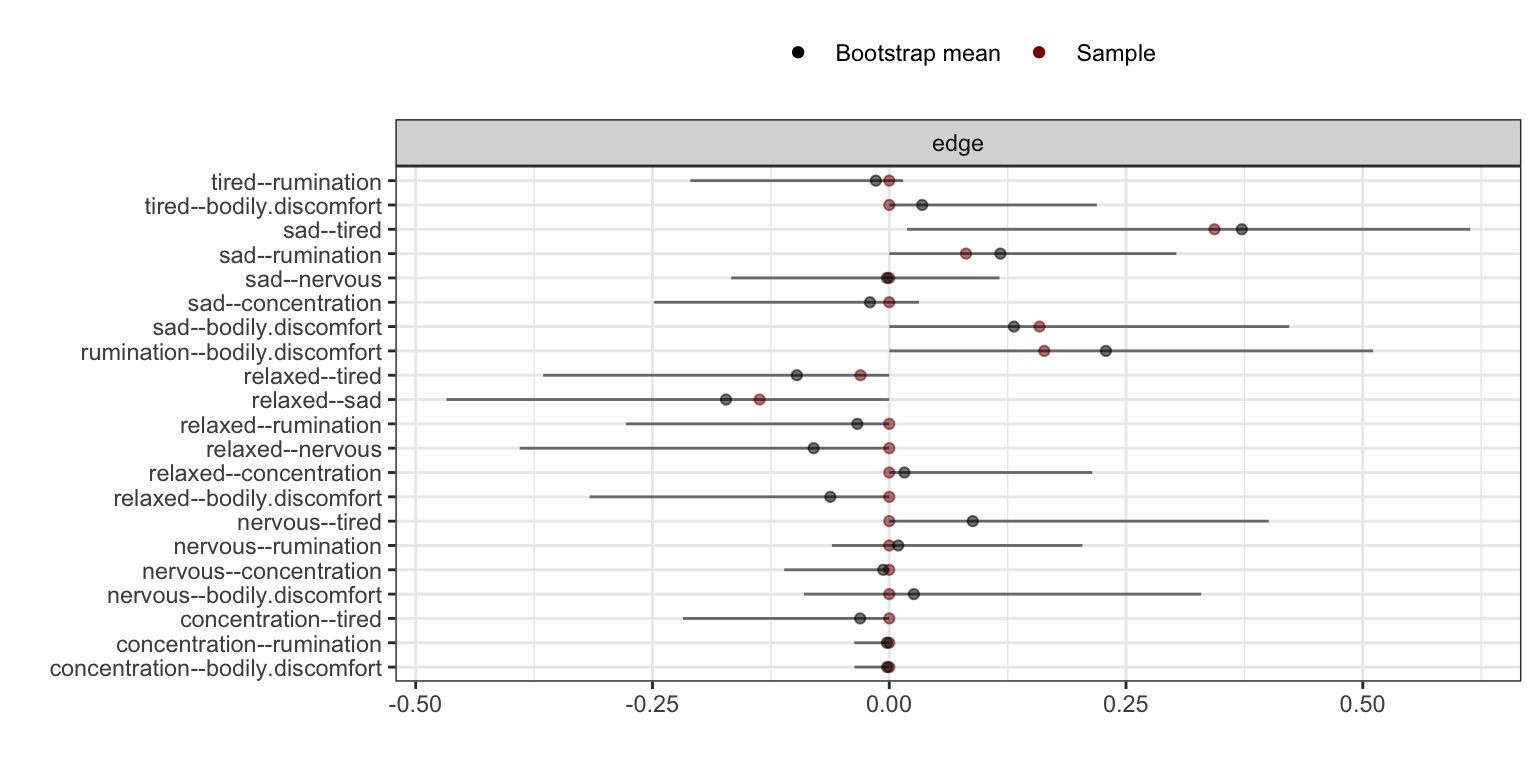 Some of the new default sets (ggmModSelect, TMFG and LoGo) do not rely on regularization techniques to pull estimates to zero. Rather, they first select a set of edges to include, then estimate a parameter value only for the included edges. The default plotting method of edge accuracy, which has been updated to include the means of the bootstraps, will then not accurately reflect the range of parameter values. Making use of arguments plot = "interval" and split0 = TRUE, we can plot quantile intervals only for the times the parameter was not set to zero, in addition to a box indicating how often the parameter was set to zero: 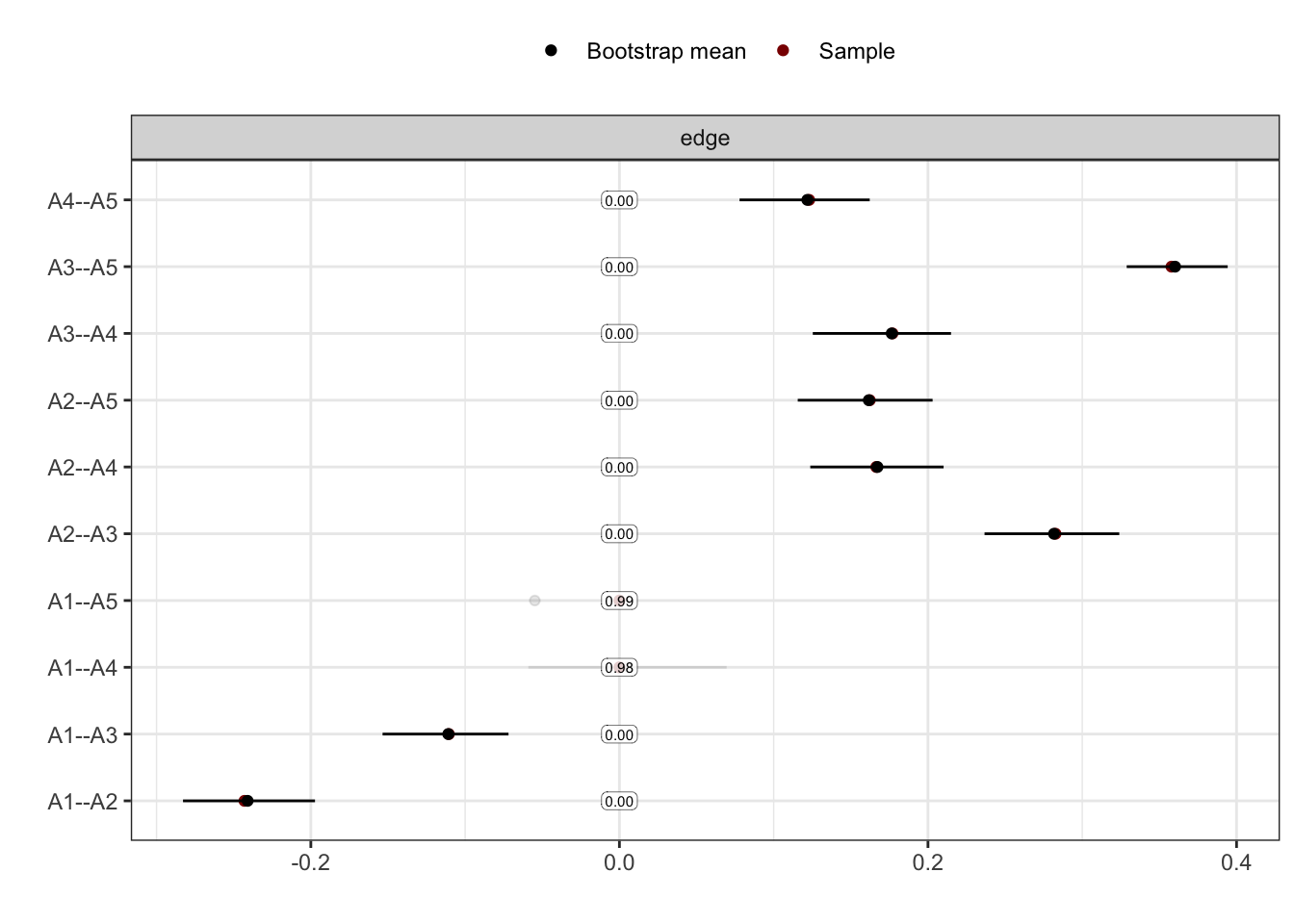 This shows that the edge A1 (Am indifferent to the feelings of others) – A5 (Make people feel at ease) was always removed from the network, contradicting the factor model. The transparency of the intervals shows also how often an edge was included. For example, the edge A1 – A4 was almost never included, but when it was included it was estimated to be negative. 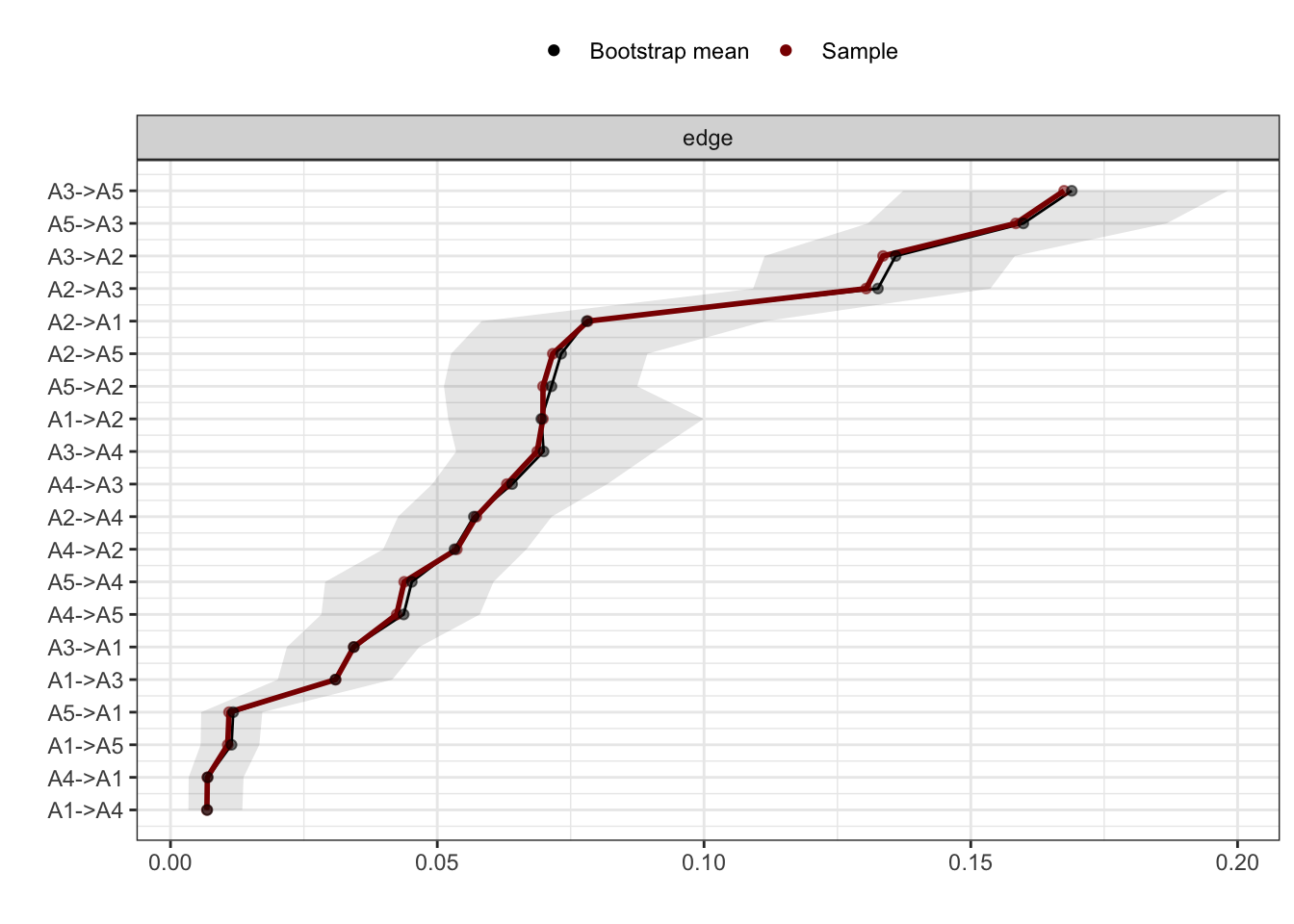 The netSimulator function and accompanying plot method have been greatly expanded. The most basic use of the function is to simulate the performance of an estimation method given some network structure: 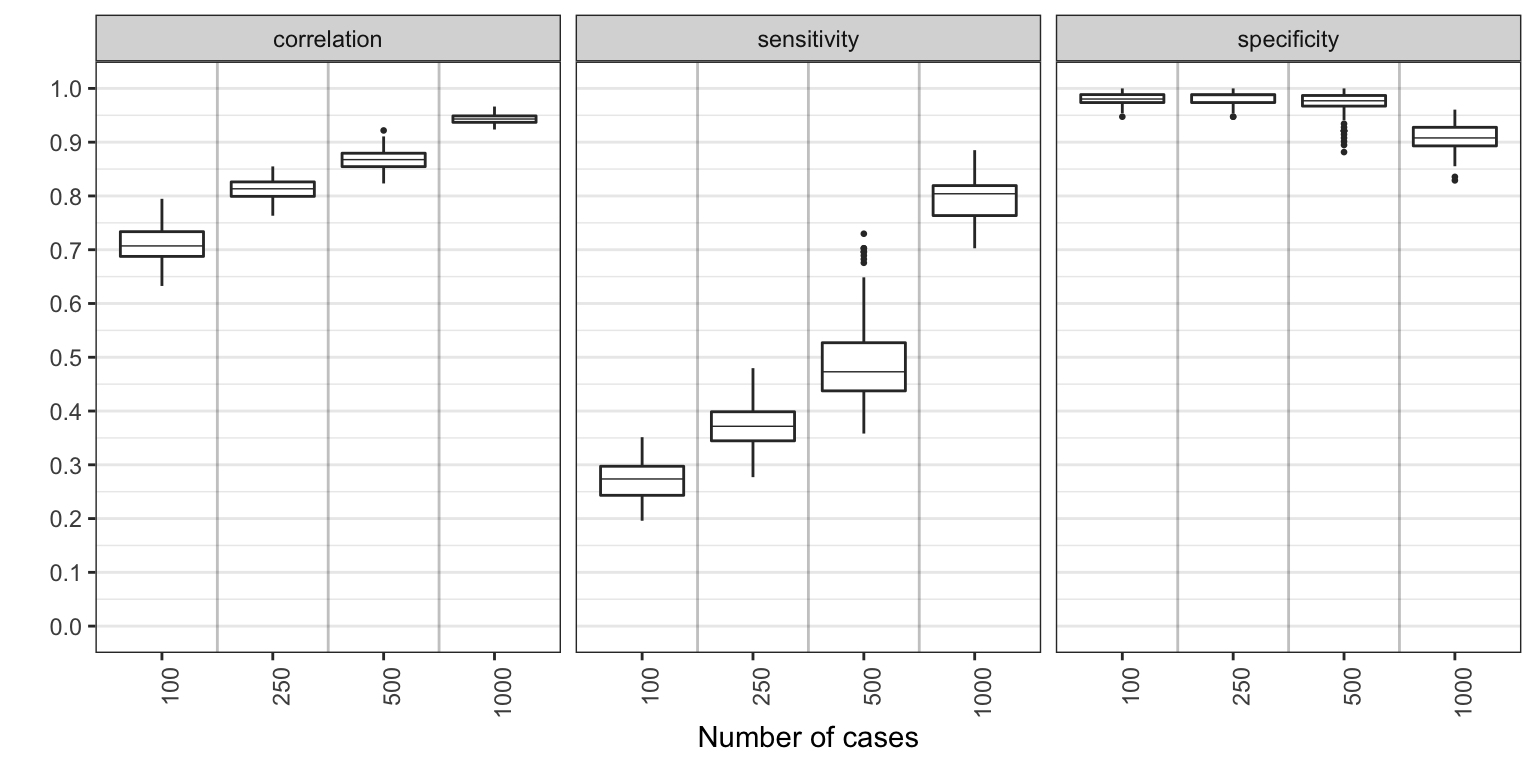 Instead of keeping the network structure fixed, we could also use a function as input argument to generate a different structure every time. The updated genGGM function allows for many such structures (thanks to Mark Brandt!). In addition, we can supply multiple arguments to any estimation argument used to test multiple conditions. For example, perhaps we are interested in investigating if the stepwise model improvement is really needed in 10-node random networks with \(25\%\) sparsity: 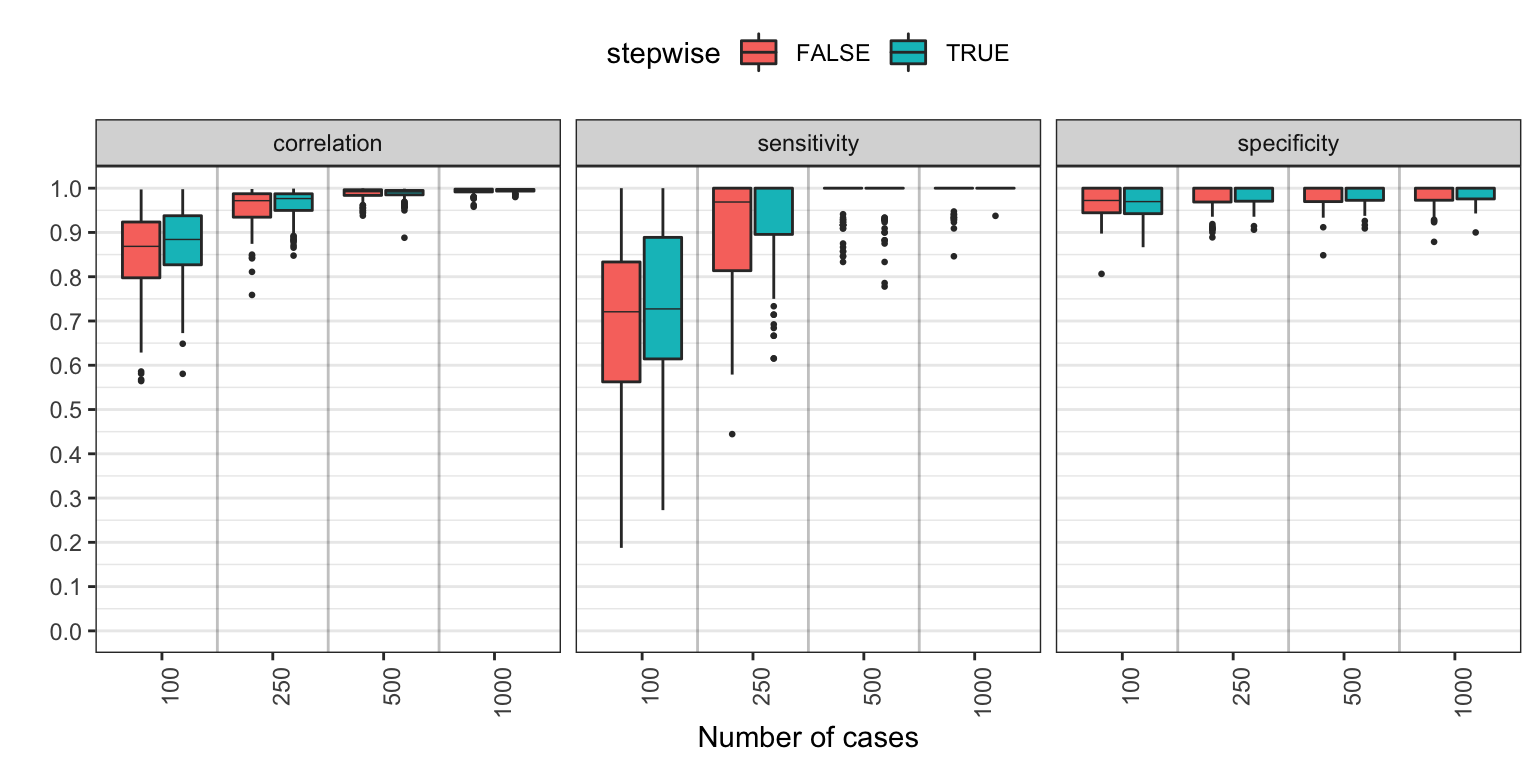 which shows slightly better specificity at higher sample sizes. We might wish to repeat this simulation study for 50% sparse networks: 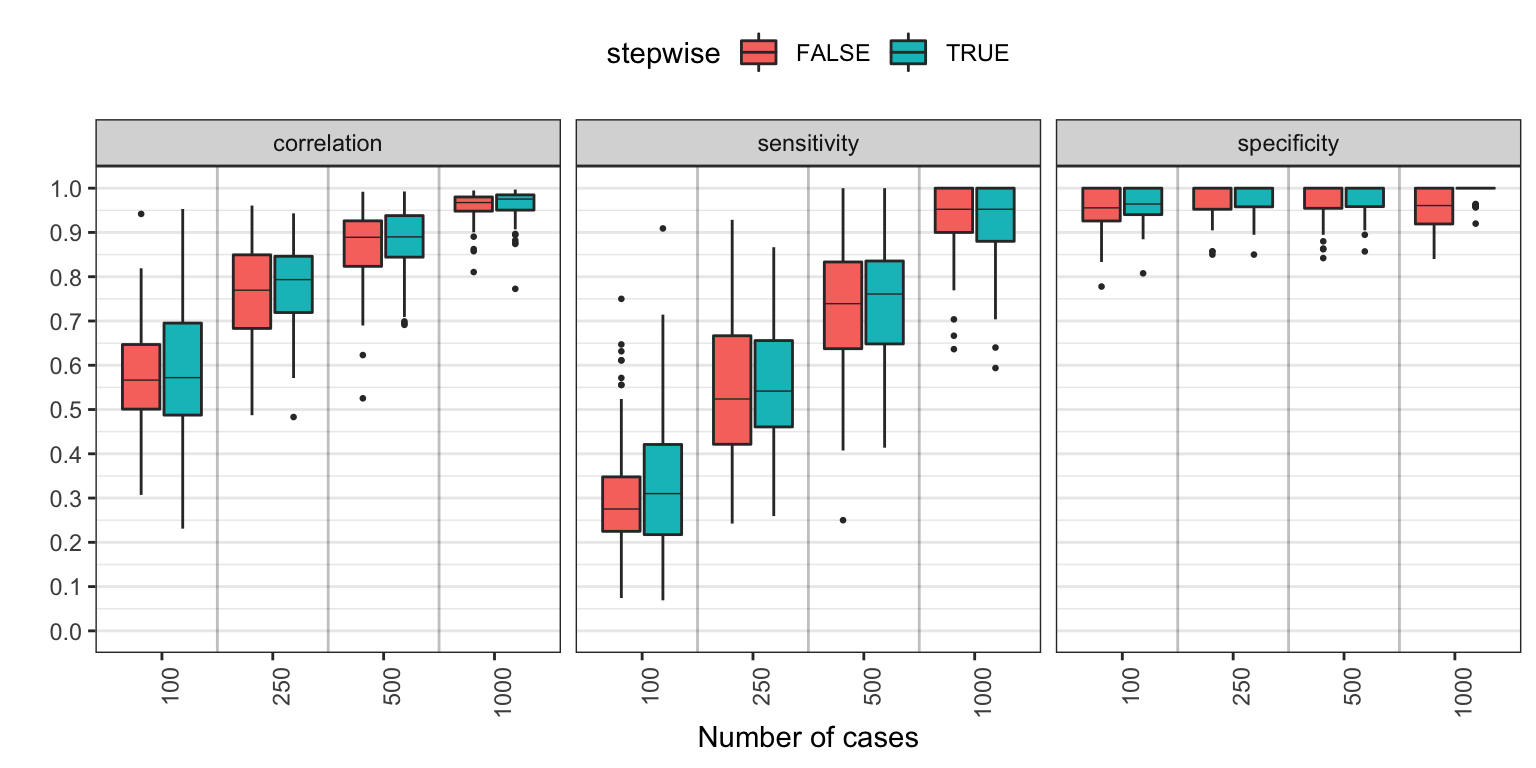 The results object is simply a data frame, meaning we can combine our results easily and use the plot method very flexibly: 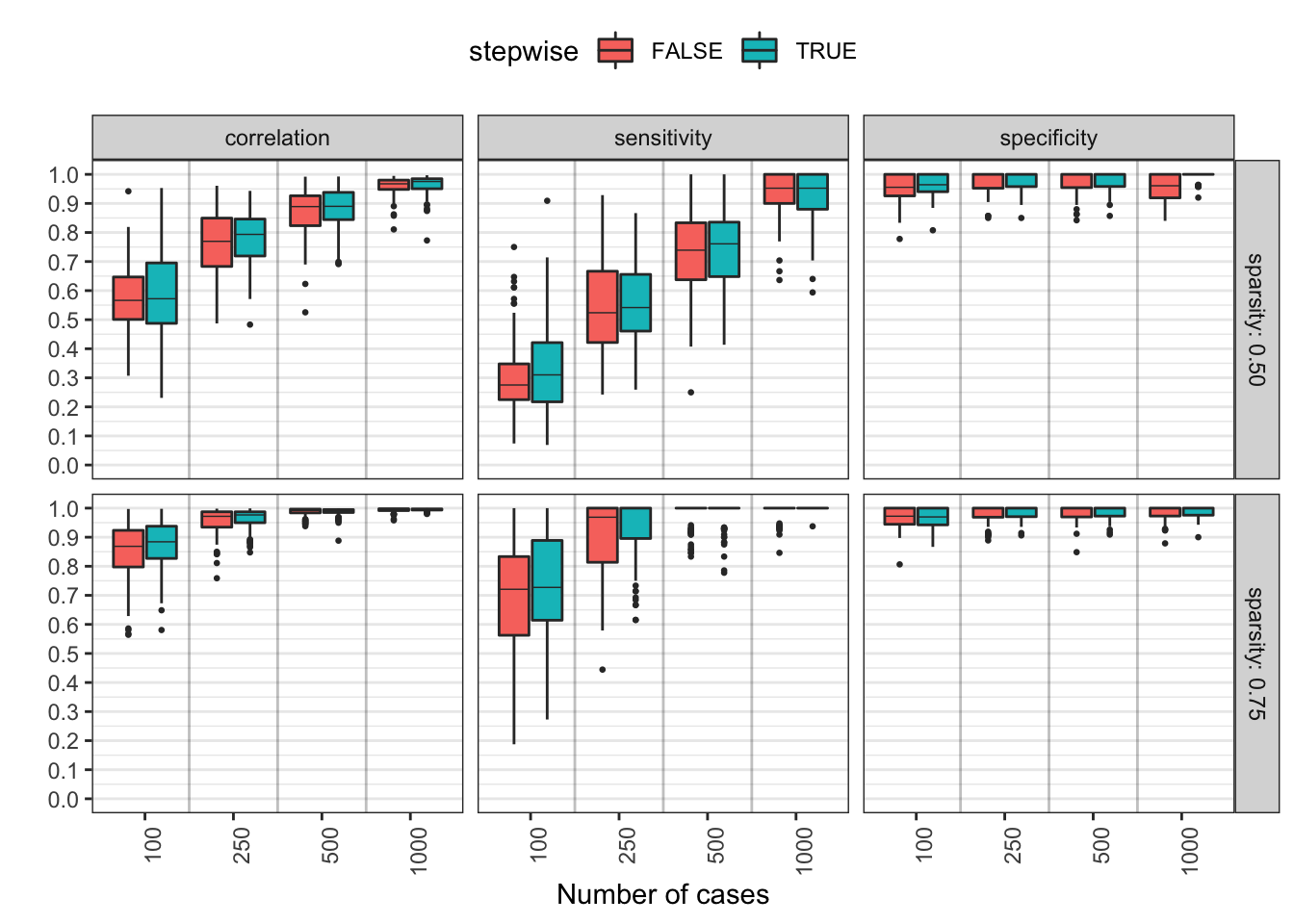 Investigating the recovery of centrality (correlation with true centrality) is also possible: 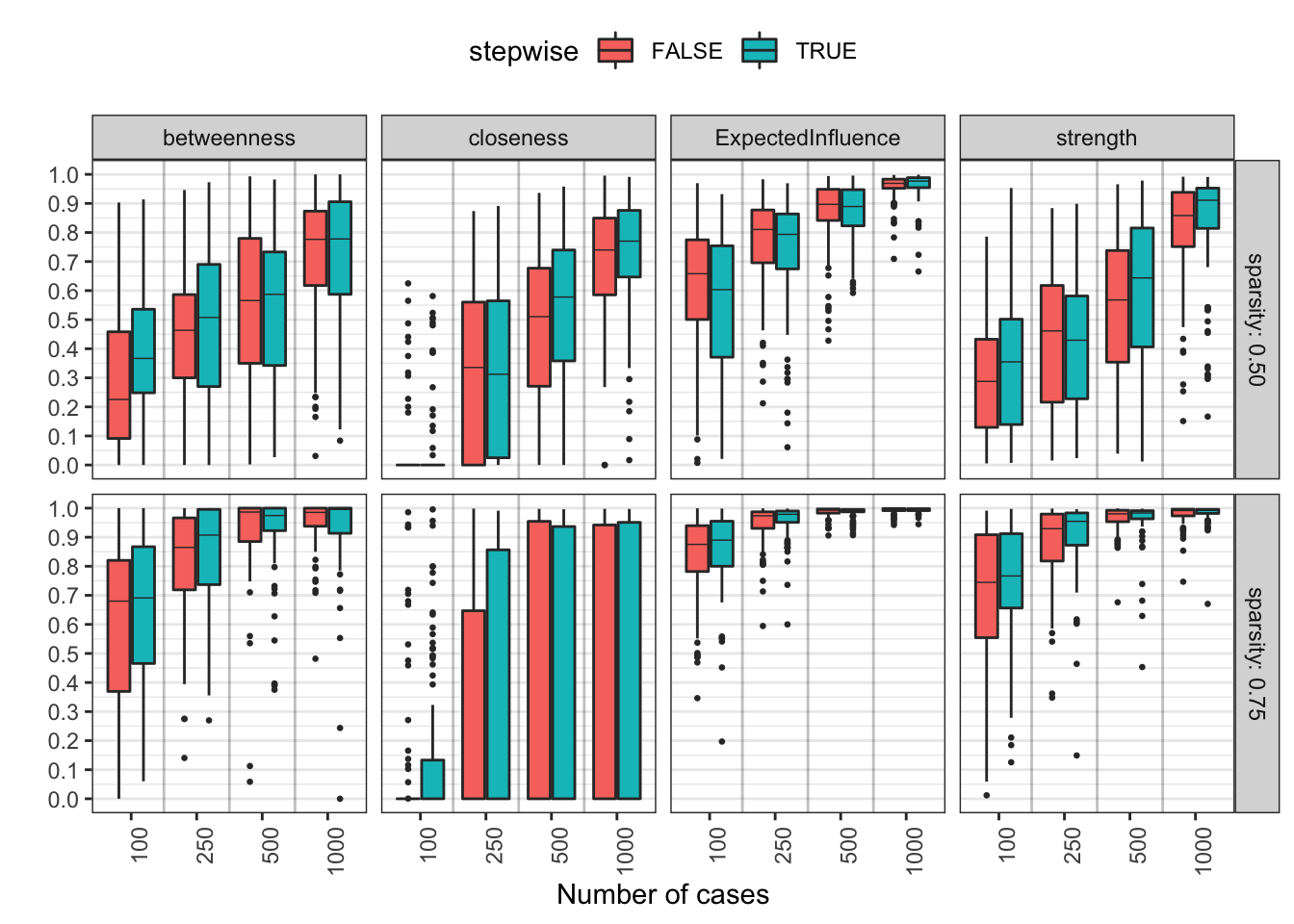 Likewise, we can also change the x-axis variable: 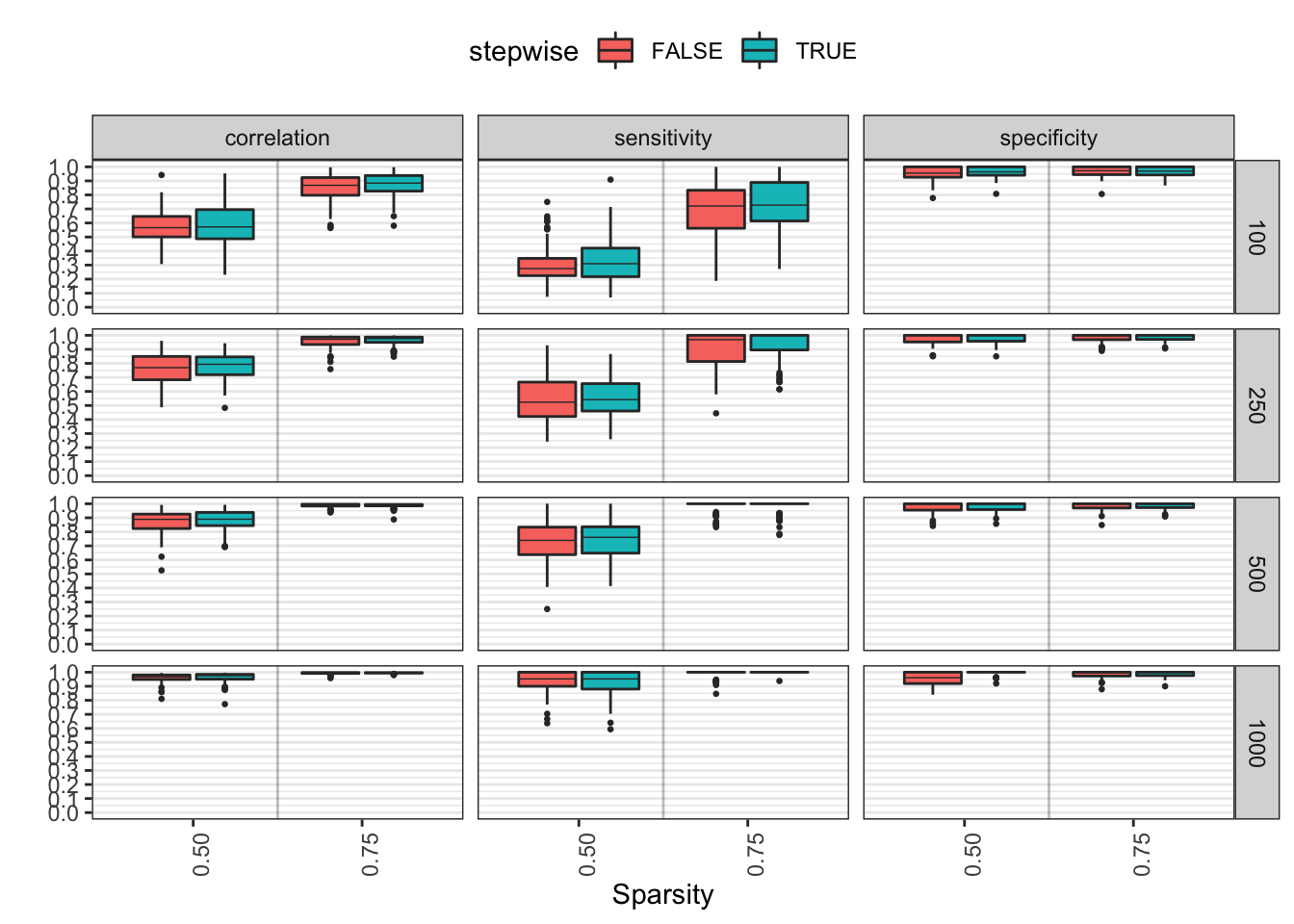 This allows for setting up powerful simulation studies with minimal effort. For example, inspired by the work of Williams and Rast, we could compare such an un-regularized method with a regularized method and significance thresholding: 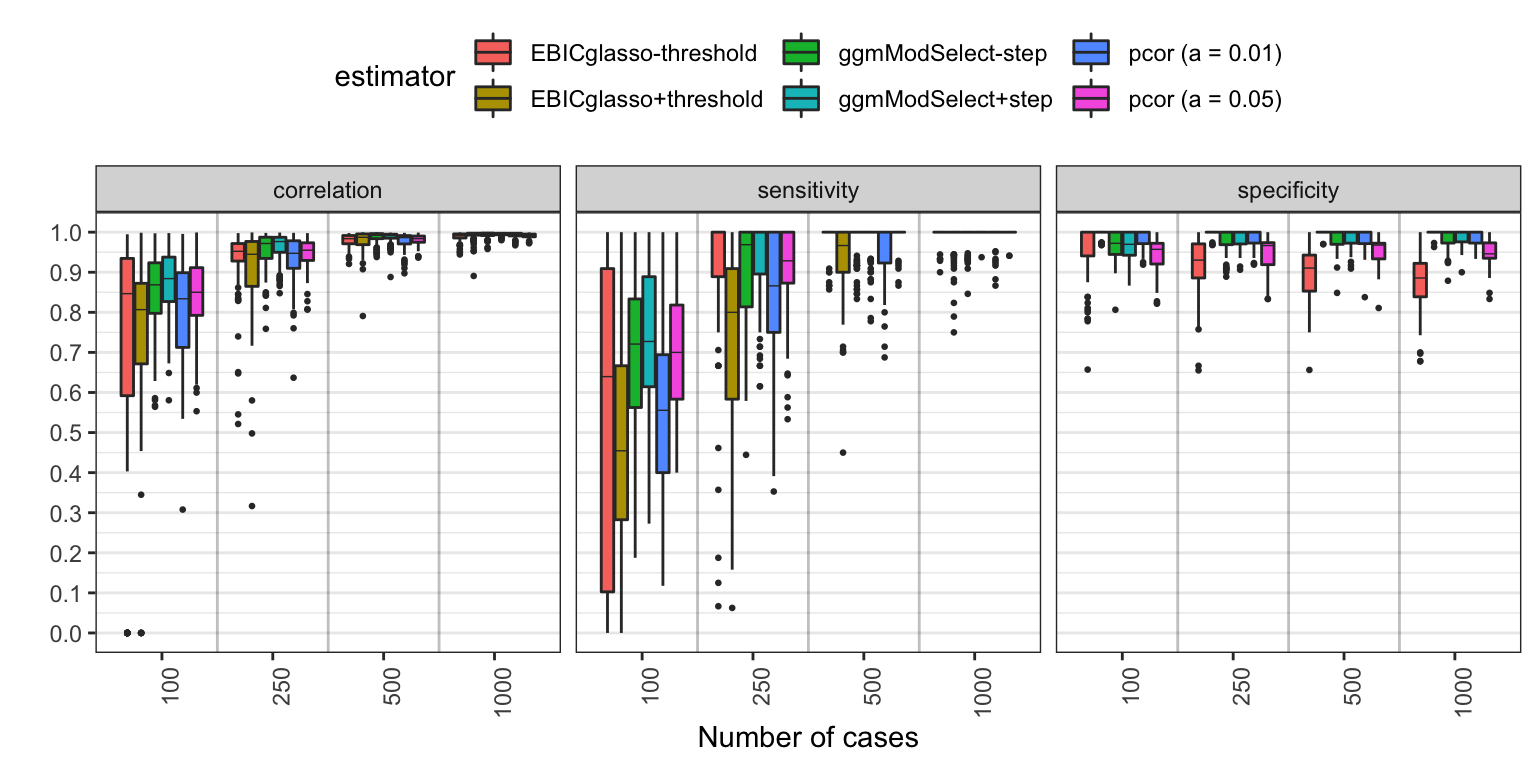 In response to a number of studies aiming to investigate the replicability of network models, I have implemented a function derived from netSimulator that instead simulates two datasets from a network model, treating the second as a replication dataset. This allows researchers to investigate what to expect when aiming to replicate effect. The input and usage is virtually identical to that of netSimulator: 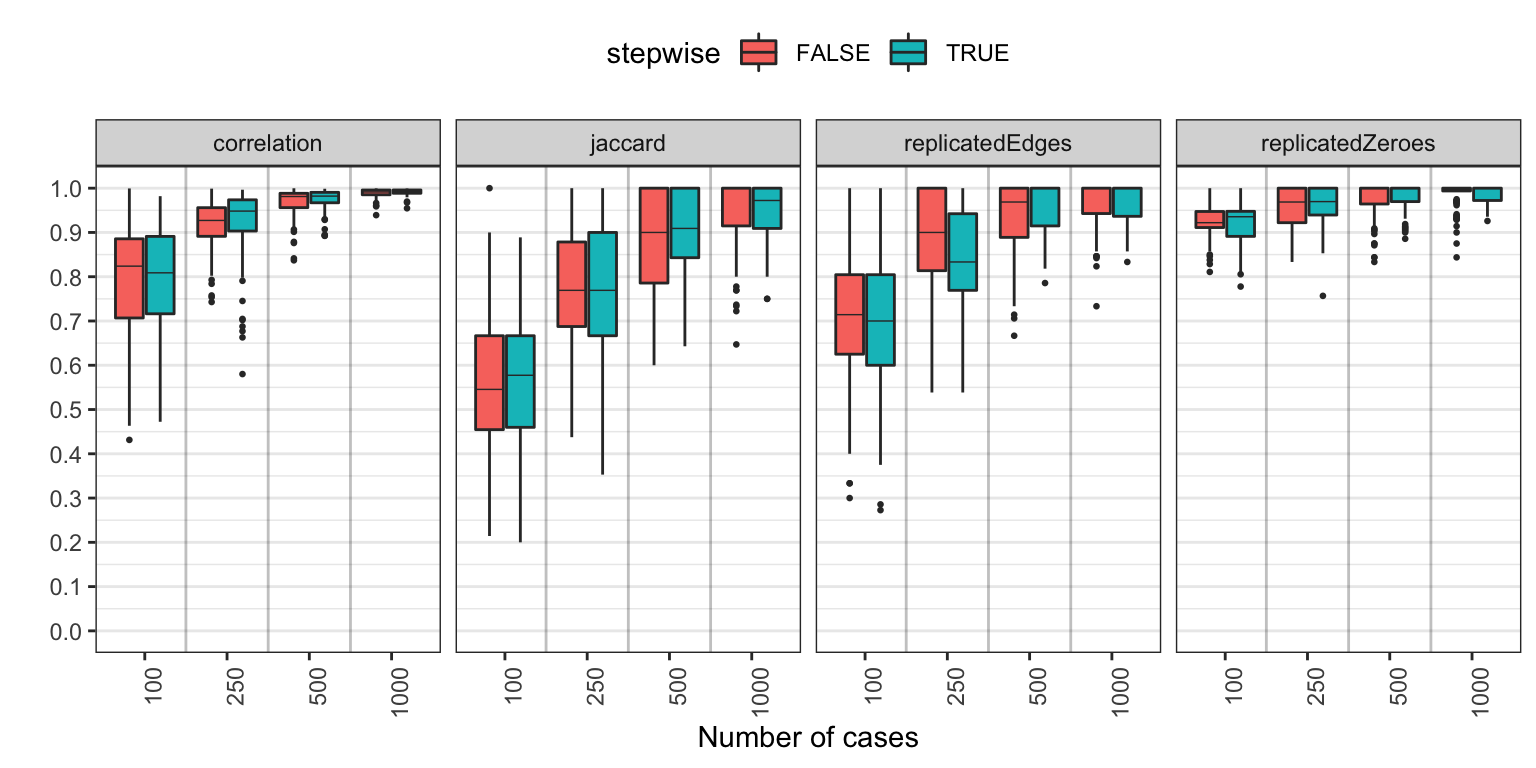 As always, I highly welcome bug reports and code suggestions on Github. I would also welcome any volunteers willing to help work in this project. This work can include adding new default sets, but also overhauling the help pages or other work. Please contact me if you are interested!